Home > Content Marketing > Case Study: How Palladium Successfully Localized Its Content
The Palladium Hotel Group was looking to drive more direct-to-consumer sales. So, how could they achieve the increase in conversions they were seeking? Here’s how we did just that.

The Palladium Hotel Group was looking to increase conversions on its website. They came to us for an SEO audit focused on internationalization. From there, based on our findings, we started working on developing and executing an extensive SEO revamp and content marketing plan to ensure their online presence was as strong as their brand.

But before we go any further, what is Palladium?

The Palladium Hotel Group, based on the Spanish island of Ibiza has more than 50 years of experience in hotel operations. Palladium’s founder, Abel Matutes Juan, sought to bring paradise to his guests and offer them top-notch experiences. While initially starting in Spain's Balearic and the Canary Islands, today, Palladium has grown by leaps and bounds. The chain operates 44 properties under ten brand names including Ushuaïa Unexpected Hotels, Hard Rock Hotels, OnlyYOU, TRS, Grand Palladium Hotels & Resorts, as well as Palladium Hotels-with a total of 14,000 guest rooms between them. You can find Palladium’s hotels in Spain, Italy, Mexico, Brazil, Jamaica, and the Dominican Republic. In its most recent ranking, Hosteltur, a Spanish hotel industry publication, ranked Palladium as the 10th-best hotel chain in Spain.

What was our challenge?

Palladium came to us because they wanted to improve their web positioning internationally and were in the process of preparing a long-term move to a new website.

The audit we initially carried out focused on international SEO as well as highlighting a variety of technical components. The results of that audit illustrated some critical problems that were hurting their SEO, and as a consequence, their conversions and direct-to-consumer sales.

Their website used geofencing technology that restricted the content for a browser based on the user’s IP address. Geofencing (now illegal in the EU) did not allow for Palladium’s website to score on a global level for SEO and instead was only basing its scores on the US version of the site.

We also identified areas for Palladium to revamp their website architecture, helping to make sure they were providing the value-added content that was missing and, in turn, could help increase conversions. As an international brand, they also needed to improve local SEO for the different markets they were targeting due to the discrepancies found on the local Google Business results as compared to the global website.

Finally, there were issues with the content on their website that were not benefitting their SEO. Their content was not in the language native to the audiences they were targeting, and it was also missing critical pieces in the customer journey that were impeding them from ranking in search engine results. Along with the technical SEO improvements, the content needed to get rewritten for six priority languages using the dialect that each target audience would use while ensuring it aligned with the level of quality consumers expected from the Palladium Hotel Group brand.

The project was focused around producing content that leveraged SEO keyword results, to optimize the existing web pages and the new microsites. This approach allowed us to complete the missing pieces of the customer journey while achieving top-ranking SEO positioning and the desired conversions. Besides language, we were going to need to include technical SEO components that focused on not only structuring URLs in a way that it would allow these pages to move up in search engine results but to also organically integrate the necessary keywords directly into the content and meta descriptions.

How did we do it?

After completing the initial SEO audit and identifying the issues to be corrected, we chose a selection of pages that urgently needed to be fixed. We made the page decisions based on traffic as well as the potential conversion opportunities that could arise from them. As well as revamping existing pages, we also restructured many of the selected pages, to include new sections that would enhance the content value.

Overall, we focused on the following areas: destinations, dining, general information, locations, as well as pages that highlighted brand-specific offerings and services.

The content was produced and updated in real-time, per the client’s requests and ongoing brand adjustments. We focused on creating content that provided potential guests with the proper information to truly imagine the full Palladium experience, while also ensuring we met client needs as well as the SEO improvements that were needed to complete the project.

As with all our content marketing projects, we leveraged our direct network of native copywriters to ensure that the language was not only grammatically and syntactically correct, but that it also authentically adapted and connected to the local culture, a process known as transcreation. Why did we use this approach? Direct translation does not account for the differences in the way multiple countries speak the same language.

With transcreation, we can consider the idioms, common phrases, and other sociolinguistic components that best emulate the vernacular for the target market. Here’s a practical example of how this could apply. When it comes to travel, British consumers prefer to "find the best offers" while Americans prefer to "find the best deals." When undergoing our keyword research, we had to ensure that we were using the keywords that best match the search terms in each target market. If we were optimizing for the US market, we knew to use “deals” because that’s what would be appearing in search results.

Another critical aspect of this project was working with our SEO team to ensure that we were also optimizing the content we were writing to improve conversions. We conducted keyword research for each of the selected pages, as well as optimizing the individual URL names to include the terms that would allow the pages to reach the top of search results.

Throughout the entire process, we worked on making improvements to their existing website that would come into play for when they moved their site onto a new platform. As a consequence, the project had two parallel goals for both long-term and short-term objectives. The long-term goal, as part of the migration to a new website, would have a higher-level platform with greater functionality, more advanced design and concept, and of course, an improved customer experience due to the work we completed.

The project included specialties in the following areas: 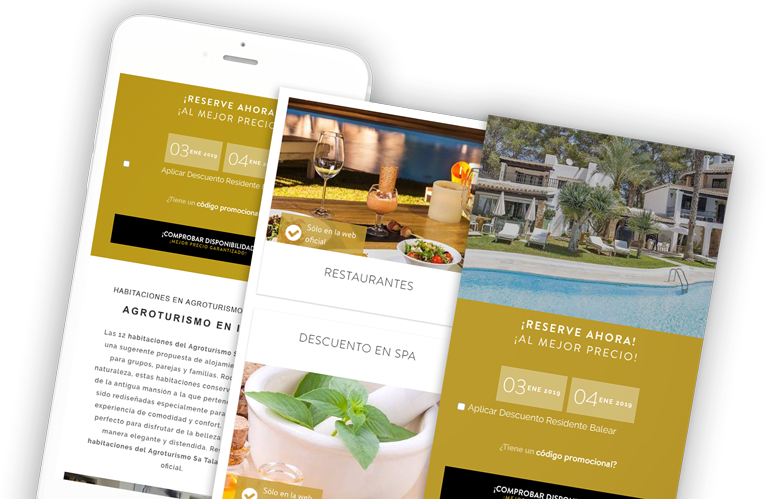 What results have we seen until now?

At the end of the project, we successfully completed more than 230 URLs adapted for the six target languages in the project: Spanish, English, Italian, German, and French for 22 Palladium properties in Ibiza, Sicily, Jamaica, the Dominican Republic, Mexico, and Brazil under the TRS, Grand Palladium, Fiesta, and Palladium brands, as well as the Agroturismo Sa Talaia property in Ibiza. The URLs we worked on were a mix of optimizing already-existing website content and new web pages, including microsites for the individual hotels.

What's next for Palladium? 2019 will see the opening of three new hotels. The first hotel under the Bless brand just opened in Madrid, and two more openings will follow this summer: the Palladium Hotel Costa del Sol near the southern Spanish city of Málaga and the second Bless hotel in Ibiza. In a recent interview with Hosteltur, Sergio Zertuche, the Marketing & Sales Director of the Palladium Hotel Group, commented that for the group, brands serve as a security policy that will allow them to take on the future as they continue to eye openings of new properties in markets where they are currently operating as well as new countries.

3752
Written By
Natasha Gingles
I'm a International Project Director with more than 10 years in the digital marketing industry, developing and implementing 360º strategies, including managing social media and influencer projects in addition to content strategies for both B2B and B2C. I have excellent client service capabilities, executing long term campaigns and brand strategies.
Contact
Subscribe to our newsletter
Get updated with latest marketing trends
questionnaire
Generate value-adding content geared towards conversion
Find out how the Palladium Hotel Group optimized its website content to foster more direct-to-consumer sales.
Read the complete case study
< Previous post All posts Next post >
Your inbox deserves great content

No thanks. My inbox is fine as it is.
Related articles
Content Marketing

Call to Action: how to optimize your CTAs to increase blog conversion

Types of web content and social media to increase engagement